The Excelsior Alumni Association of Florida is pleased to have made a contribution in the amount of US$1,000.00 towards the fencing of the playing field. This is a joint venture between the Alumni chapters. 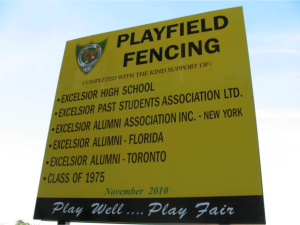 Chalk up another pledge kept to the Excelsior Alumni Association of Florida following the official reopening on September 27, 2012 of the refurbished dance studio, amid much fanfare, at the alma mater.

In January 2011, the Association selected the renovation of the dance studio as its 80th Anniversary Project in recognition of Excelsior’s eight decades of existence. Tucked away in a quiet corner of the school’s campus near the gymnasium, the rejuvenated facility is the new face of dance at Excelsior and opened this week after a summer-long renovation. The improvements feature newly installed wooden flooring, a restored roof, repainted walls and improved ventilation and lighting. The Florida Alumni body contributed some J$360,000.00 to the rehabilitation cost which, was jointly undertaken with the school. 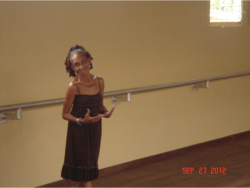 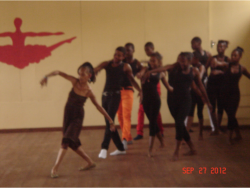 Althea Brown-Robinson, the president of the Florida-based alumni organization was on hand to participate in the reopening of the facility after making a whirlwind visit home for just that purpose. The facility was reopened in an elegant ribbon-cutting ceremony hosted by Senior Vice Principal Mrs. Allison Peart.

Grey skies and the threat of rain did not deter those gathered for the occasion. Before a gaggle of students, teachers, including Principal Mr. Deanroy Bromfield, the School’s Chaplain, and Dance Mistress Ms. Patsy Ricketts, and a sprinkling of alumni, the alumni president made a brief speech during which she observed that the dance studio initiative was the latest completed project and a symbol of her organization’s enduring commitment to the alma mater. Mrs. Brown-Robinson presented a plaque which she requested be placed visibly in the Dance Studio, “not as an advertisement of our contribution, but to be used as a reminder to current students to become active alumni and be willing to give back to their alma mater.” The alumni president recalled being a member of the Excelsior dance troupe led by current Dance Instructor Ms. Patsy Ricketts that won gold at the National Festival during the 1970s.

Principal Bromfield thanked the Excelsior Alumni Association of Florida for the contribution and hailed the collaboration between the alumni and the school in seeing the project to fruition. Mr. Bromfield said he looked forward to other such ventures in the future. In her turn at the microphone, Ms. Ricketts complimented the Alumni Association and said she was thankful that the students could now work in an improved environment. The rehabilitated dance studio should inspire the dreams of every aspiring dancer.

The alumni president capped her brief visit to Jamaica with an appearance on the TVJ program Smile Jamaica, accompanied by Patsy Ricketts and with a performance of the Excelsior dance troupe.

The 80th anniversary dance floor renovation commitment provides the perfect coda to a year of giving back to the alma mater. In 2012, the Association made a 3-year commitment to support DASH Athletics, as that group endeavor to help restore Excelsior’s waning track and field legacy. So far this year, the Excelsior Alumni Association of Florida has donated well in excess of J$750,000.00 to help underwrite various initiatives at the school.

For 2014, the Florida chapter has committed US$2000.00 to the XLCR community. Our board has decided to give this donation to 3 programs as follows:

The Excelsior Alumni Association of Florida will be supporting Sports and will be entering into a 3-year covenant with the DASH athletics organization to assist them in their mission to revitalize the Track and Field program. We will be funding at least one of the athletic camps up to an annual amount of US$2,500.00.

In addition, we will tap our membership for equipment and sports gear in an effort to assist with clothing and furniture for the facility.

Contributions in the following areas and for the amounts as specified.

In 2007, XLCR Alumni Association of Florida donated 22 new hockey sticks, 40 hockey balls and 2 sets of goal keeper gears in support of the three female hockey teams. This donation is in response to a request made by the hockey coach, Miss Hockey.

XLCR Alumni Association of Florida also donated US$1,500.00 to support the reinstatement of the 6th Form at XLCR.