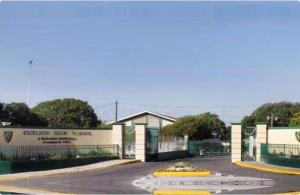 The central figure – Honorable A. Wesley Powell, O.J., founder of XLCR, a visionary, a dreamer, an intellect, a hard-worker – crystallized a pledge he made at 15 years old – his pledge for starting a school for the poor and the over-aged. It must be noted his determination was fueled because he was refused entry to Calabar High School because he was deemed too old. The headmaster told his father – “Wesley is much too old for admission…sorry you should have applied four years earlier”. Thanks to that disappointment –an acorn was planted, and we now have a mighty Oak – EXED.

The Excelsior School was started on January 19, 1931. There were 5 students on the verandah of Mr. Powell’s parents’ home in Campbell Town. The sign that hung over the gate – painted on a green background with bold yellow letters read “EXCELSIOR SCHOOL” and below in small letters – “Kindergarten, Preparatory, Secondary and Commercial” – in hind sight he was prophetic.

The school’s academic reputation, willingness to “rescue and recover” academically challenged students as well as much cheaper tuition led to increased attendance and the need for larger accommodations. It moved from Campbell Town to North Street and finally to Antrim. XLCR was eventually changed from a privately owned institution to be owned and operated by the Methodist Church.

The objective of Mr. Powell was to prepare his students for a lifelong journey. He was focused on:

Our school crest, name, and motto are an inspiration to all of us. The school crest is green, silver and gold with an eagle in the middle. The green depicts youthfulness, silver & gold for the fortunes in store for successful Excelsorians and the eagle soaring on open wings with eyes towards the sun was to be an inspiration to excel. The name XLCR means “yet higher”. Our motto Age Animo – “Do it with thy might”.

The XLCR-EXED Story by A. Wesley Powell used as reference.