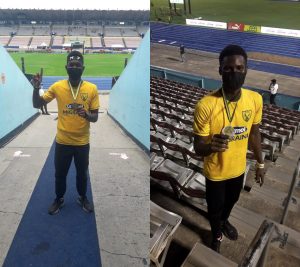 The JAAA National Senior and Junior Championships 2021 were held over the past four days. The championships acted as trials for the Tokyo Olympic Games scheduled for July 23 to August 8; the North American Central American and Caribbean Athletics Association (NACAC) U18 & U23 Championships – Jul 9-11, 2021 in San Jose, Costa Rica and the World Athletics U20 Championships in Nairobi, Kenya, August 17-22, 2021.

Following the trials and pending confirmation by the JAAAs selection committee, four XLCR Eagles are expected to be on the team to Nairobi. The four were quite impressive at the National U20 Champs:

All four ran on the XLCR Eagles championship 4x400mR team at the recent Boys Champs which set a new school record of 3:07.85.

Congrats to these four young men and to their coaches and support staff. Eagles ever soaring!

Other Eagles participating in the meet included:

In the U18 Championships, the Eagles were represented by:

The Lady Eagles were represented by Omarian Constable, Chenessa Davis, and Rhianna Lugg who were 4th, 5th & 6th respectively in the LJ.

The name ‘Excelsior” indicates superior quality which is demonstrated by the Excelsior High Athletics programme which continues to punch above its weight guided by the school motto Age Animo – Do it With Thy Might.