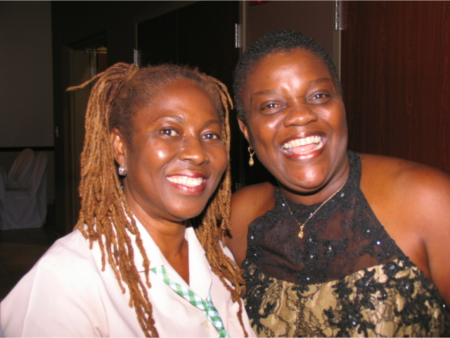 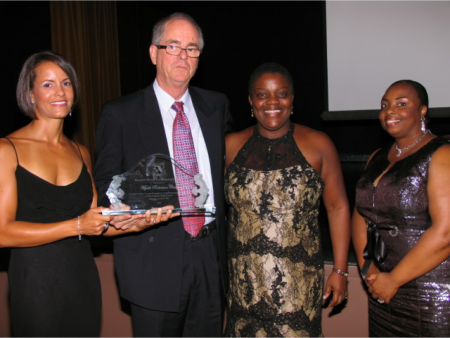 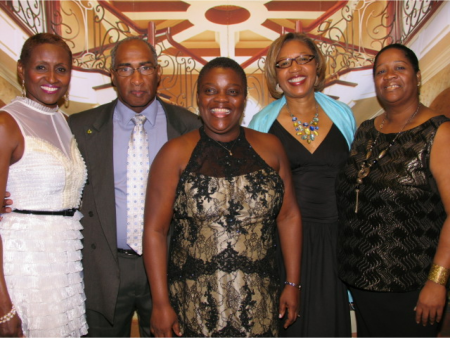 On a searing summer evening in South Florida, celebration and introspection were both in the air as the Excelsior Alumni Association of Florida hosted its inaugural Dinner and Dance, Saturday July 16, at the Miramar Multi-Purpose Center, to commemorate the 80th anniversary of the founding of the alma mater.

In her opening remarks, President Althea Brown Robinson, who doubled as MC, saluted the audience for their patronage then delivered a brief history of Excelsior High School since its founding in 1931 by the late Hon. A.W. Powell. She also gave a synopsis of her chapter’s activites since its reactivation some fifteen years ago.

These activities included, she said, a robust effort to build a dance studio at the school; the continued long term project to renovate the bathrooms at the Excelsior; underwriting a number of scholarships for students at Excelsior as well as contributing to the upkeep of the physical plant. In addition, as part of the Excelsior Alumni Association of Florida’s community outreach, it had made a significant contribution to the Haiti Relief Effort after that country had been devastated by a recent earthquake. The President hailed the patrons- which included a cross-section of Excelsior past students, spanning many decades-and thanked them for supporting Saturday’s gala which, she reminded, was part of the organization’s broader fundraising effort.

At the stylish and tastefully understated event, the evening oscillated between laughter and somberness as members and supporters of the organization were also gathered to pay homage to alumna and former game’s mistress Mrs. Myrtle Cross. During the dinner, the organization also recognized the contribution of former teachers Mr. Hugh Jones and Dr. Selburne Goode. Mrs. Cross, who is currently contending with health issues, was honored in absentia and was represented by members of her family including husband Ian, daughter Amanda Seaga, son-in-law Andrew Seaga, and niece Carol Ann Chin.

President Robinson gave a moving anecdote on the impact Mrs. Cross had made on her and her contemporaries while they were students at Excelsior. Afterward a video collage of photographs of Mrs. Cross was projected on an overhead screen while the lilting jazz-inflected song This is Your Life gently percolated in the background. Later, Miss Desreine Taylor, Consul and Acting Consul General from the Jamaica Consulate presented the plaque to Mr. Cross and daughter Amanda on behalf of the Excelsior Alumni Association of Florida.

Speaking on behalf of his wife, Mr. Ian Cross thanked the Alumni Association for the accolade and joked that for more than 40 years few had known his real identity other than as the “husband of Myrtle” or “father of Amanda”. Turning more introspective, he delivered a poignant speech noting the profound role Excelsior had played in the life of his wife. So pivotal a role Excelsior had played in his wife’s life, he pointed out, that at the first inkling that her health was deteriorating, the family had made the decision to take her on a visit to the school campus, confident in the belief that the familiar surroundings of her beloved alma mater would play a therapeutic role and provide succour to Mrs. Cross.

The President thanked members of the Cross family for their presence and singled out Mr. Cross for special gratitude for his magnanimous gesture in refusing the Alumni Association’s offer to sponsor his passage to Florida. He instead volunteeered to pay his own way as his contribution to the organization’s fundraising efforts.

All evening, the organizers including President Althea Brown Robinson and executive members Doreen Campbell, Debra Byfield, Owen Howe , Judith Pitter, Maureen Fidler, Michael Aitchetson as well as the advisory board, were showered with kudos for their magnificent effort in staging the anniversary event. The food, which featured a cake rendered in the green and gold standard of the school and topped by the logo of the Excelsior Alumni Association of Florida, and highlighted by a sumptous blend of Jamaica and American cuisine, also came in for special commendation from an appreciative audience.

But the evening was not all sedateness as Jeanne Powell, who many felt was a virtual reincarnation of the late Hon. Louise “Miss Lou” Bennett-Coverley, the famed Excelsior alumna and Jamaican cultural icon, gave a riveting and wildly amusing performance which added a bit of levity to the occassion. In her hilarious take on the Excelsior story she mused on how the school got its name. Ms. Powell recounted an imagined conversation between the Founder, Hon. A.W. Powell (no relation) and a prospective student of his fledgling school. According to her version of the Excelsior story, it unfolded like this:

Mr. Powell: Why do you want to come to this School?

Mr. Powell: That’s it! I will name the school Excelsior!

The comediennne said she always considered herself an Excelsiorian although she never graduated from the school. She conceded that although she was never an official student of the school, she wanted so badly to attend the school that she even deceived her parents into believing that she was. Young Jeanne Powell had even bought herself a school uniform, presented herself on the campus each day and helped with all the schoolwork assigned to her cousin, so that she felt she had done enough work to have graduated from Excelsior!

In recognition of Ms. Jeanne Powell’s enterprising attempt to become an Excelsiorian, President Althea Brown Robinson presented her with an “official” faux Excelsior Graduation Certificate, to the amusement of the audience.

The formal part of the evening out of the way, DJ Leslie Grant, provided music for dancing, which went on into the wee hours of Sunday morning.

Please see the photo gallery for snapshots of the event.