They came. They sweated. They frolicked. Last Saturday, a picture-perfect day was the ideal backdrop as the Excelsior Alumni Association of Florida hosted its annual Family Day at Markham Park in Sunrise, Florida.

Throughout the day, scores of alumni with their families, friends and supporters converged on Markham Park from the South Florida region and beyond, for a day of fun and frolic. Attendees enjoyed reconnecting with friends, former classmates and well-wishers for an excitement-filled day of activities in the park.

Some of the highlights of the day included competition in an array of games and activities. Among these, the adults enjoyed the egg and spoon race, scavenger hunt, and pitted wits against each other in a Jamaican-themed history trivia contest. Meanwhile, the children competed in enjoyable activities uniquely tailored to them. Alumna Karieva Warburton emerged as the double winner of the scavenger hunt and trivia contests.

It was meant as a celebration of the XLCR family but friendly rivals and “interlopers” from Kingston College, Calabar High, Convent of Mercy (Alpha Academy), St. Hughes and other alumni joined in on the fun and were warmly embraced as they passed through the park throughout the afternoon to lend their support.

As dusk fell, and it was time to vacate the park after a pleasurable day, Althea Brown Robinson, president of the Excelsior Alumni Association of Florida took to the microphone to thank the attendees for their patronage and brought them up to speed on her group’s activities.

Next up on the group’s social calendar is the annual Xmas Bash, Saturday, December 8, 2012. 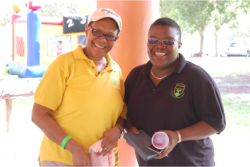 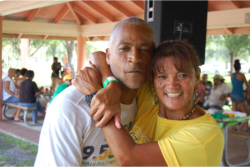 “Tikaz” from KC & Adrienne “Addy” Chin-Ogilvie, from Alpha, were among alumni from other schools who came out to lend their support.