Rhodes Scholarship to Daughter of Alumnus

The Rhodes Scholarship, established in 1902, provides full financial support for up to three years for recipients to pursue a degree or degrees at the University of Oxford in the United Kingdom. It is among the oldest and most prestigious international scholarships and was established from a bequest from Cecil Rhodes, a British diamond magnate.

Excelsior alumnus Carol Aina (’76), Senior Tutor at the Norman Manley Law School was effusive in her praise of her former student. 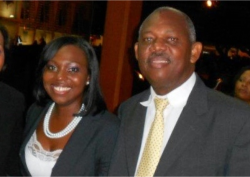 “Well done Kamille! She has been my student and is very deserving of the award,” she exulted via an email correspondence. “During our weekly mentorship program at Excelsior, Berley informed me that his daughter was soon to come to the Norman Manley Law School. He was however very modest about her exceptional abilities.” Berley’s bashfulness seems to have been misplaced judging by Kamill’es sublime academic performance.

According to Senior Tutor Aina, Kamille’s selection as the 2011/ 12 Rhodes Scholar came as little surprise because it came on the back of an academic career studded with numerous awards. Kamille entered the Norman Manley Law in 2009, having earned a First Class Degree from the Faculty of Law of the University of the West Indies.

Kamille never wavered from her high standards for excellence and graduated from the law school in 2011 as the Most Outstanding Year 2 Student. She was subsequently awarded the coveted Certificate of Merit which is bestowed on students who earn not less than nine ‘A’ grades throughout the course of their stay at the law school. The former Ardenne High School student is currently employed at the law school as a Research Assistant. She was on the verge of being called to the Bar when she was announced as the recipient of the 2011/12 Rhodes Scholarship.