The Downers – A Tradition of Benevolence

Legends of Excelsior
The Downers
A Tradition of Benevolence

On the second day of Christmas the Downer family cruised the streets of metropolitan Kingston bearing gifts: warm meals and clothing for the homeless who dot the streets of the capital city.

It is an annual Boxing Day act of charity, spanning more than 25 years, that this iconic Excelsior family has quietly engaged in, away from the public glare, for decades.

“We were never a rich family; far from it” second daughter Gaynor Downer noted, “but our parents always instilled in us the value of sharing and giving back.”

The Boxing Day tradition started at the urging of matriarch Mrs. Alice Downer. Annually, each member of the family helps in all aspects of the preparation and serving of the meals.

During the 2011 Boxing Day activities, as the family’s three-car caravan weaved its way through back alleys, near gullies and bridges in Kingston, the clan handed out meals along way the to the destitute.

Later, as the family parked the vehicles near the Ward Theatre in downtown Kingston, a cluster of homeless citizens patiently waited in line to be served. The 301 meals served this year comprised rice and peas, chicken, tossed salad, macaroni and cheese which were served with a slice of Christmas cake and a cold drink. To mark the 25 years, 200 commemorative T- shirts were printed with the slogan ‘25 years of Love’ and distributed among the more destitute. 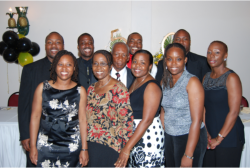 If there is the hint of disappointment, according to the family, it is that the number of homeless seems to be mushrooming with each passing year.

“I was struck by the quiet dignity of these people,” said the eldest daughter Dr. Goulda Downer. She related anecdotes of sharing by these destitute individuals who, despite their own needs, were willing to give a portion of whatever they got to their homeless peers.

Until the story of the Downer’s generosity was first featured in the Jamaica Gleaner a year ago, few were aware of this remarkable family’s history of benevolence. And that is just the way the family would have wanted it because, to them, charity should be its own quiet reward.

So at firstborn Paul’s wedding, 25 years ago, Mrs. Downer suggested that the family should find a tangible and more organized way to thank God and of paying homage to the next generation of Downers.

She suggested feeding the homeless and, although at first the magnitude of the undertaking gave pause to some of the family, they never looked back. And so the family’s Boxing Day tradition was born.

The latest Boxing Day treat was only one of a range of charitable ventures that the family supports with its own personal funds. This year marks the 10th anniversary of the Alice and Noel Downer Scholarship Fund at Excelsior High School.
“The entire Downer family has been a tower of strength, source of encouragement, support and a lot of inspiration” said an appreciative Randy McLaren, former Excelsior Head Boy and a recipient of one of the family’s scholarships.

The Downer family is one with deep roots in Excelsior going back almost 40 years, with seven of the eight children having graduated from the high school. Additionally, patriarch Mr. Noel Downer served as president of the school’s PTA for 25 unbroken years, even after all his children had graduated.

All the children led rounded lives while at school and were able to blend academic pursuits with active participation in a variety of varsity activities.

Goulda, Gaynor and Hayley played hockey for the school and even went on to represent Jamaica in the sport; Joel was Head Boy in 1981 while sister Caren later served as Deputy Head Girl in 1984 and represented the school at netball. Phillip, Joel’s twin, played in the school band while Karl, Caren’s twin played cricket for the school. Sisters Goulda and Hayley also played netball for Excelsior.

In addition, twins Phillip and Joel were members of the cadet corps and sister Gaynor later returned to volunteer her skills as a physiotherapist to the school’s Manning Cup football team in 1984, for an unbroken run of over 10 years .

The Downers view their commitment to helping the less fortunate as almost a sacred trust. So their remarkable story of kindness will continue to unfold each Boxing Day as they share their blessings with the less fortunate in Jamaica

“There are a people with real needs in Jamaica, and we will always try to help” said Gaynor Downer. It is a pledge which the family is determined to keep.

© This is a copyrighted work and should not be reproduced, in whole or in part, without the expressed permission of the author or the Excelsior Alumni Association of Florida